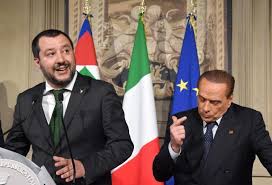 Watching Italy slide towards the brink has a certain fascination.  If only the protagonists weren’t such bad actors it would be worth an Emmy or two.  This week the situation has resolved itself a little, but is couched in tweets and fake news worthy of the White House, so the average  Giuseppe wont have cottoned on to it yet.

We have a budget in October – it’s an impossible challenge for the yellow/green government.  Europe is keeping its paws on the drawstrings, so the parties cant give what they promised – ideal for Europe as they want the government to fail.  The Lega wants to institute a flat tax rate – now much minimised, while the M5S want to introduce the ‘citizens wage’ for the poor and unemployed – now dissolving into a short term unemployment benefit.  Neither wants the other’s option but there is a contract of government.  As nothing will be delivered, the path forward is clear – ‘its all Europe’s fault’.  The increasing volubility of this particular blame game is designed to create enough ill feeling to support a change in the constitution and a subsequent referendum to leave – it being the peoples’ will.   ANd Salvini is proving a master at the game.

The other night The new Lord of Darkness went for dinner with Voldemort at Arcore, to sew up a nice little agreement which will protect Berlo’s tv empire.  The ancient one is worried about the M5S proposals to cap tv publicity – something which has bolstered his empire for 30 years.  In return for the Lega doing nothing, Forza Italia will abstain on the vote for the new head of Rai – Foa (see previous whinges).

In the meantime the Lega has been instructed to immediately give back the 49 million euros it stole from the state, but has been allowed to pay by instalments – over the next 79 years, which ties in nicely with the Lega’s proposal to allow a ‘fiscal peace’ by letting people off the money they owe the state – up from 100K to a cool round million.

On top of all this, we have a fiendishly clever plan to help the flat tax by lowering the income tax band threshold but increasing IVA/VAT .  Devlishly clever for a country which wants to diminish the amount of cash washing around, invisible to the taxman.  Increasing IVA is the simplest way to augment the black economy, and it seems that Salvini wants that – presumably so that he blame Europe.

My less than educated guess is that by next summer we will have an attempt to change the constitution.

Posted on 20/09/2018 by rammers. This entry was posted in Uncategorized. Bookmark the permalink.