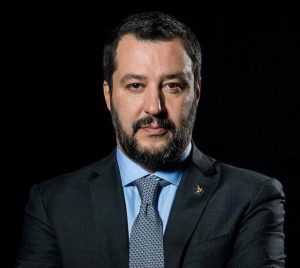 The new Lord of Darkness, Matteo Salvini, has been flexing his muscles since he got into his new office as Home Office Minister.   As vice PM (along with Di Maio) they are the chief architects of the governments policies, but Salvini has shown himself to be the master tactician up till now.   Dedicating himself to inculcating a hatred of migrants/immigrants in the populace, he has been very successful,  closing ports to NGO’s, and now trying to do the same with military ships which have rescued migrants.   Not a day goes by without some gobbet of hatred being disseminated by his press office, and the polls reflect the populace’s support of his intolerance and ignorance.   The head honcho of INPS – the  Italian DWP – dared to point out that without immigration Italy will be wholly unable to pay pensions in a few years.  He was shot down in flames by Salvini who, not only regurgitating the Italians jobs for Italians myth, also suggested that he may remove people from their posts who gainsay him.    It’s going to get ugly.  The M5S have seen their support dissipate, mainly because their desperation to get into government saw them ally themselves with a party so far to the right they are tainted with the same brush.

At the weekend we had the unedifying spectacle of a PD assembly – where Matteo Renzi shouted alot and gave his ten reasons for the PD not winning the election. 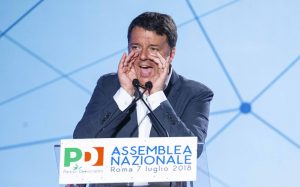 So self regarding is Matteo that he himself did not enter into the ten reasons.  Perhaps he should trust 3rd parties on this one.  Ask anyone why the PD failed so dismally at the elections and the answer will be ‘Renzi’.  There are months if not years ahead the PD shriving itself, and yet on Saturday a timid voice dared to point out that if the PD had worked with the M5S, as was offered, we may just have had a forward looking reforming government at this point.   The unpalatable truth is that political parties in Italy prefer opposition to government.  They get all the perks of being able to siphon off huge sums of money and get power and influence without the problem of having to make unpopular choices.

Talking of money Salvini has a little problem of his own.  49 million euros of a problem if truth be told.  The Lega Nord, as it was then, took this money as electoral reimbursments, and then it disappeared – seemingly siphoned off into offshore accounts.  Salvini claims ignorance, even though a largely worrying letter has come to light from the Lega accountant, which pointed out that Salvini and the Lega would be committing a crime if they hid all the money.   Salvini says that it is impossible that the party of government could be held responsible for such a thing, and is demanding it is swept under the carpet.  The M5S and their calls for honest and transparency have suddenly gone very quiet.

It could be an interesting summer.

Posted on 09/07/2018 by rammers. This entry was posted in Uncategorized. Bookmark the permalink.