Looking like a mafioso this is the man who could bring down Renzi, and all because of a tiny little ‘mixup’.

It is in fact Alessandro Alfano 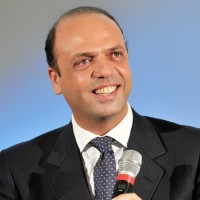 and it seems there has been a bit of family influence at work.

Alessandro, it now appears, got a job as a university professor before getting his degree – and while it’s possible he is a highflier it seems more likely that it happened after a phone call or two.  After leaving his university job, AA1 won a concorso to become a big shot in the Chamber of Commerce of Trapani – mafia heartland in Sicily – only to suddenly resign due to force majeur – when it transpired that his curriculum included posts he had never actually held.   Not to be held back in his quest for a large pension pot, his Dad sent off a large number of CV’s to the post office, and after a couple of phone calls AA1 found himself having a job created especially for him at a salary of 160.000 euros pa.   Over the last couple of days various phone interceptions have come to light that show that he may have got the cushy number because he was related to AA2 – and things are getting complicated.  Another wave of bribes and undue influence of the NCD is causing anomalous ripples in parliament.

As you will remember, the NCD was founded when AA2 left the bosom of Uncle Steptoe and set up his own party which has become the crutch of the Renzi government.  Even though now at less than 2% in the polls, the NCD ( good catholic remnants of the defunct and disgraced Christian  democrats), holds the balance of power in parliament. Unfortunately for them around 30% of the precious few MP’s are involved in criminal investigations for fraud and other unparliamentary stuff.  In the last year two have resigned their cabinet posts for getting relatives jobs and not being squeaky clean.  So, if and when AA2 is found to be complicit in AA1’s career trajectory there will be howls calling for his resignation.  And that will bring down the government.  The slimy Verdini and his ALA – another disaffected group who abandoned uncle Steptoe in the hope of being kept under parliamentary immunity, are also getting chitty.  If they jump ship it will mean elections, but not before the referendum on the changes in the constitution adn possibly under or not the new election law – which will give a handsome majority to the M5S even though it was designed to keep the PD in power for the next umpteen years.  Renzi is remaining silent – though he pushed for the last two resignations.   It’s all unravelling too quickly, as Renzi falls in the polls and Steptoe, just out of hospital after they discovered he had a heart, not able to jump into the election ring.   I give it till the end of the week.

Posted on 07/07/2016 by rammers. This entry was posted in Uncategorized. Bookmark the permalink.