Today we are launched into the elections for the new President of the Republic and its a farce.

Renzi hasinstructed his party to vote white slips for the first 3 elections, which means there will be a series of names put forward that cannot win, and then on Saturday Matteo will reveal the name of his candidate who everyone must vote for.

As to who it will be, there is the usual jostling for position – and frighteningly the name of Bersani has been tossed into the ring along with Prodi.   Berlo wants Casini or Amato. 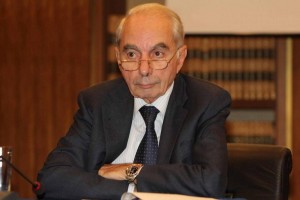 This little hobbit is a life long politician who by now has a pension of about 12o00 euros per month, and a job of half a million a year – he is about 270 years old having risen to prominence as a lackey of Craxi in the 70’s.

Anna Finocchiaro – who would be the first female president of the repubblic and is a constitutionalist – in the Tony Benn style – except that ITaly’s constitution isnt at the moment worth protecting seeing as it is roundly ignored.

The upshot of all this secrecy is that Berlo is getting deeply annoyed as he wants someone who will give him a ‘royal’ pardon, the left is annoyed because they dont see Renzi’s game as being very democratic as are the M5S – so unless a rogue candidate is elected by chance, by the dissatisfied, we have to wait till Saturday to see who Matteo is going to unveil as the chosen one.

Posted on 29/01/2015 by rammers. This entry was posted in Uncategorized. Bookmark the permalink.