As slippery an an eel

We have been treated to the less than edifying spectacle of the DOM wetting himself with delight, as the judges absolve him of all chaarges in the Ruby case.  Needless to say it raises difficult questions about the Italian justice system if a man can be condemned ‘absolutely’ in first degree and then have complete absolution in the second.   However accept we do, and now have to batten down the hatches for the media onslaught of the smug little pensioner telling us how he always knew that he was innocent.

La Pascale says it was the happiest day of her life – so happy that she practised her make up tricks on Silvios saggy old eek – nice bit of lippy and a touch of eye shadow seems to be the way to jazzup the walking corpse this week: 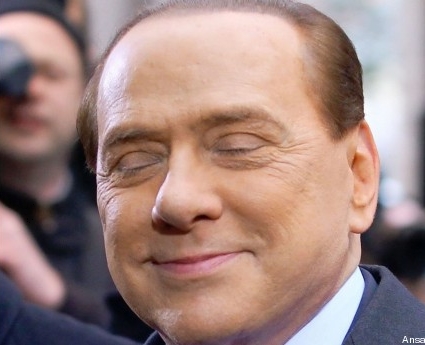 However, all is not lost.  The next trial up is the buying of MP’s votes, and there is a MP who took 3 million from Toad and has confessed all – it will be difficult to see this one being put on the back burner.  And of course, Renzi will have his reforms, Napolitano can retire and all will be well with the world.  Instead of this farce, Renzi could have just sided with M5S for the reforms and let Forza Italia stamp their little feet, and not given a toss about Silvio’s woes – but it seems that Renzi is becoming more of a Berlo fan every day.  We have nothing in his 1000 day reforms to limit the power of Berlo’s empire/political influence/conflict of interests and now Berlo is rehabilitated after the Bunga Bunga saga.

And to cap it all we have the gradual slithering into the limelight of Luigi Berlusconi.

This young man is almost saintly we are told in Chi – magazine owned by Berlusconi and edited by the acidly loathsome Signorini – bezzie mate of Barbara Berlusconi – Not only does Luigi spurn the limelight (only have double page spreads every month) he spends most of his time in prayer.   Hes a banker, we are told – and now handles some of the Berlo money – the Berlo5 trust which is some dosh held for the 5 kids from various mothers.   But he doesnt want to tread on piersilvio’s toes – the eldest son in charge of mediaset who appears in Chi with his 6 pack at least once a month. 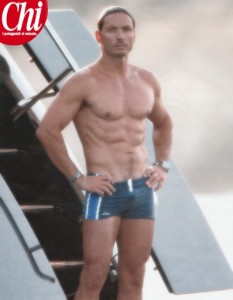 Nor is he interested in Mondadori and thereby doesnt tread on Marina’s toes, nor in football – lucky Barbara is left to ruin Milan on her own.  So what is Luigi’s destiny – well its looking as though it may well be political – seeing that they are denying it all over the place.   He’s had some work in a private swiss bank whose  only client seems to be his father, so that will set him up perfectly for the life of nepotism ahead.   When he’s not praying obviously.

Posted on 19/07/2014 by rammers. This entry was posted in Uncategorized. Bookmark the permalink.