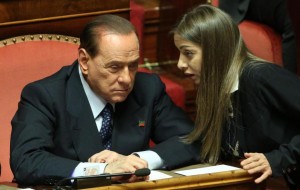 The woman with Moldevort in this pic is none other than the new treasurer of Forza Italia Maria Rosaria Rossi.   A new treasurer only a week before the elections that will bring home the worst result for Silvio in the last 20 years.  It looks as though the ancient one is protecting himself against a grass roots revolution that has been brewing for some time.  You see, Maria Rosaria Rossi is the bezzie mate of Francesca Pascale – Neapolitan office girlfriend of the wrinkly man above, and Francesca has spent the best part of the last 18months getting her not inconsiderable talons into Silvio, by alienating his closest advisors (who have now jumped ship for the new NCD party) and promoting herself as the saviour to all ITaly’s problems.  This time she has got her other selfie to be treasurer of FI which gives her virtally overall control as Silvio slips into insanity.  Trouble he wont marry her.. yet  so she hasnt got her hands on the name, which is what she wants – so she can stand as a Berlusconi, and (in her tiny mind) bring the party back to greatness with herself as the first woman PM.  What she has thus far failed to understand is that there will be no party in about 6 days….

Posted on 21/05/2014 by rammers. This entry was posted in Uncategorized. Bookmark the permalink.