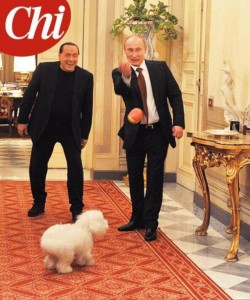 One of Silvio’s magazines published the above photo, showing Silvio and Vladi best of chums, at Silvio’s pad.  It’s unsurprising that Berlo has therefore come out against the EU and US stance against Putins expansionism – after all he will have quite a lot to lose personally if the rumours are true.   SB feels that it isnt constructive to punish Putin for invading an independent country,  as it was he who welcomed Russia into teh G8 fold – nothing to do with anyone else apparently.

The rumours of Silvio’s magic circle caused a tough response – Only I have magic powers, the old wrinkly one announced yesterday.  In the meantime Raffaele Fitto – the young upstart who campaigned for the split with Alfano and the relaunch of FOrzaItalia is threatening to withdraw support for the FI grandees, and that obviously means he is preparing an assault on the FI to grab power when Berlo is finally put under house arrest or whatever the courts have in store for him.

So it will be Fitto with the lots of black hair 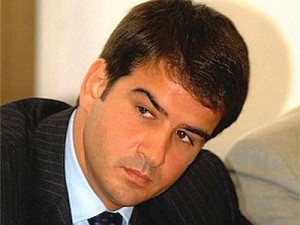 against Renzi who has rather alot of black hair – 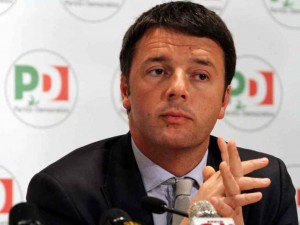 it looks like Italy could be entering into a phase of hirsute politicians….

Posted on 26/03/2014 by rammers. This entry was posted in Uncategorized. Bookmark the permalink.