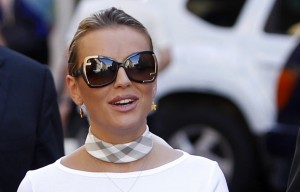 Francesca Pascale – the almost too pleased with herself girlfriend of Berlusconi is alienating most of the diehard Forza Italia brigade.  She says she asks Silvio to marry her every day – and is happy to signa  prenup giving her no money, so why she is so keen to get Silvio’s ring on her finger?   It’s down to names.  The old saggy one is prohibited from standing for parliament for 2 years given his criminal record, and thus far has failed to convince any of his children to take up the dark mantle and become his successor.  In the meantime without a Berlo on the ticket, FI is in danger of falling apart.  The internecine rivalry is becoming all to obvious, as various repellent figures jockey for position.  And this is la Pascale’s policy.  If she can become a bona fide Berlusconi, she can jump into the deep end of politics.  Not bad for a girl whose political career up to now has been licking a few envelopes.  She has banned most of the cronies from Silvio’s bedside and is now acting like a First Lady, so its only a matter of time before she and her Dudu make an appearance on a political ticket.

Posted on 24/03/2014 by rammers. This entry was posted in Uncategorized. Bookmark the permalink.