Poor Silvio,  word has got out that he may be getting wed to the ex Olgettina, Francesca Pascale in June.  A bit problematic this one, as it seems the wedding (will he never learn?) is planned for Ischia, and technically Silvio should be under house arrest by June so wont be able to go to his own wedding.   Seeing that the judges have decided not to allow him to go to Dublin for the european UKIPpy style party knees up, he should be a bit wary about asking for his passport back, or permission to stray too far from his home. 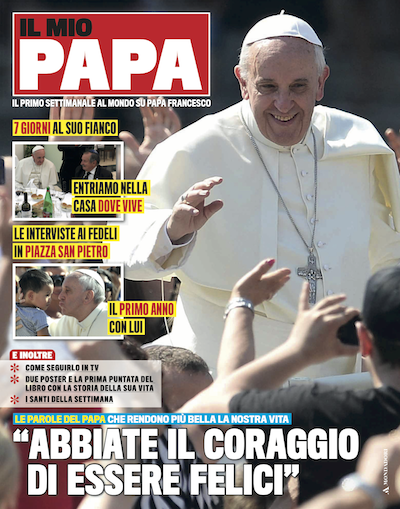 By his way of revenge, the Berlusconi stable is launching the first ever weekly OK style magazine dedicated to the Pope – its to be called ‘My little Pope’ or something equally twee and will dedicate itself to the nicest stories and photos of His Eminence.   Can you imagine if a UK publisher had the gall to cash in like that – the swaff of ironic copies, photoshop version and so on would ensure its early demise.  here, in Italy – where the nth series of big Brother has just started, it is received with glee.

Poor Matteo Renzi – he keeps talking and people just say, we’ll wait for the actions.  Its not vevry Tozza Blair like at all – so he has a week to pull something out the hat.  We are promised a jobs act, judicial reform, electoral reform, reform of the house of lords, action on schools, and an act to help the building and housing industry.   All in 10 days.  The only one that is creaking its way forward is the electoral reform which has already been so watered down, it excludes the Senate in its entirety.   And the Church has been allowed to not pay property tax.  Again.    Perhaps we have our Tony Blair president after all – a triumph of style over substance.

Posted on 06/03/2014 by rammers. This entry was posted in Uncategorized and tagged Il Mio Papa, Renzi Blair, Silvio. Bookmark the permalink.