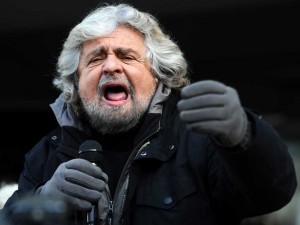 The fallout from Beppe Grillo’s unseemly tantrum in live streaming with Matteo Renzi doesnt stop.  Going back a week or so, it all started with Renzi being PM elect and inviting all the opposition parties for consultations, as one does.

Grillo announced he wouldnt go, and there was a bit of shuffling in the ranks.  As largest single party, and not entirely without influence in parliament, some 5* thought it would be good to at least meet Renzi and see what he had to offer.  In the end Grillo consented to a web vote which brought in the ‘get on your suit and nip along to see the new PM’ instruction.  So far, so democratic.  Unfortunately as Grillo is as incapable as Bruce Forsyth of not acting up to the cameras, as soon as he was inside Renzi’s office, he went off on a Ben Elton style monologue – refused to listen to Renzi’s offer, or what he had to say and then got up and left, feeling all smug and clever.

Except that this time, the 5* got pissed with Grillo.  He had been told to go an meet Renzi by a web vote – the famed liquid democracy he vaunts so much.  Admittedly he did what the vote asked him to do, but no more.  And so 4 senators (members of the Italian House of Lords) had the temerity to criticised the fat grey Gandalf and suggest he could have handled it better.  Cue outrage, denouncements and a call for a web vote on their explusion from the movement.  All of which came to pass yesterday. 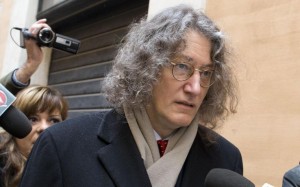 Grillo – who is unelected, and Casaleggio the shadowy John Lennon mastermind/Voldemort behind 5* (see photo) – also nonelected, have decided thatr 5* is not democratic, and no criticism is allowed.  They object to Matteo Renzi because he is unlected – which is a bit rich frankly – especially as he is more elected than them.  M5S  is in fact a fascist organisation, and Grillo has announced that he is no democrat.  The four senators who were deselected by their regional boards without them having met, but gathered some signatures from family and friends, are understandably fed up – and now 10 others are set to resign.  Which means a new political party in the senate, and very likely the beginning of the end of 5* which is now eating itself from inside out – nobody wants a liquid democracy that is neither liquid nor democratic – and Grillo, by behaving like a pantomime villain, has surely shot himself in the foot.

Posted on 27/02/2014 by rammers. This entry was posted in Uncategorized and tagged Beppe Grillo, Casaleggio, M5S. Bookmark the permalink.