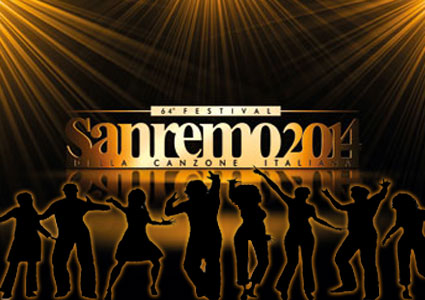 It’s only  ayear since we were subjected to the cackfest of San Remo, and yet here it is again – 5 interminable RAI nights of medocre music, unrehearsed continuity and endless schmaltz which is apparently the highlight of the Italian year.   This year we are promised that the San Remo festival of new italian music will not make a loss – for the first time ever apparently.  It costs the Rai over 20 million to parade this sub Eurovision talent annually, and even if last year they plumped for a genuinely funny female comic as co host instead of the usual octogenerian ‘family favourites’ it’s still a week long list of cringemaking tat.

This year we have Beppe Grillo threatening to go and make a scene live’ on telly.  WThere were two workmen hiding in the roof space who shouted that they want a job.  Raffaella Cara – the mummified remains of a singer who predates Dusty Springfield danced and and showeed support for the Italian sailors held in India – and that was just the first night.  You will forgive a jaded old BBC hack, but it looks like the warmup for a Comic Relief sketch.

Instead its for real – there is an outcry in the Catholic press about Rufus Wainwright being blasphemous in his song Gay Messiah – apparently Messiah is a word which can only apply to Jesus and has no relation to the word Messiah which means something else – so Rufus is a bad, nasty antichrist apparently for not knowing that the Catholic dictionary has different meanings for lots of words than any other dictionary in the land.  ANd then we had Cat Stevens who provided the highlight of the evening by singing Father and Son – strange that he is still called Cat Stevens in Italy, and that Boyzone havent received the recognition they so richly deserve for making the song famous.

And its only the first  night – we have 4 more nights of this tedium – programmed at a mere 4 hours per show, but overrunning helplessly because Italian tv directors and producers have no clue at all about anything, including sadly, camera angles and choice of shots – Ive always found it useful to frame the person who is talking when you’re filming an event – but no  not in San Remo.  Imagine if the BAFTAs were being filmed by the RAI  – you would have Stephen Fry on a secondary mike while taking a look around the back of the set and missing out completely on the award for best film because the director thought it would be more interesting focusiing in on a hundred year old dancer in a yellow leotard.  This is Italian tv.  Not even Fabio and Luciano can save it.

As light relief while we wait for Matteo to invent a new system of government, the Fratelli d’Italia  – a minute political party on a par with UKIP – have asked not to be called the Addams Family.  I leave you to decide. 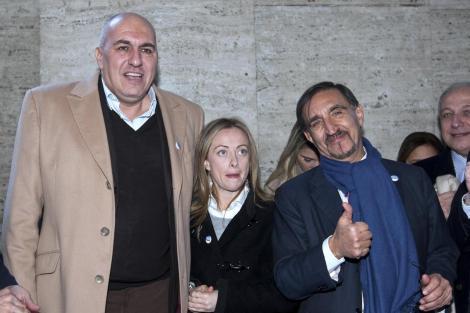 Posted on 19/02/2014 by rammers. This entry was posted in Uncategorized. Bookmark the permalink.