So much has hit the fan recently, that it has given up under the weight.  Last night, at only hours before Berlo’s launch of the new Forza Italia, it all went wrong.  Alfano (the dauphin or dolfin as he is called here (you will get the very animalistic terminology later)  – has split from Berlo saying the that extremists have won.  it seems that Berlo is determined to bring down the government, and Alfano, and all the ministers of the coalition think its more important to get Italy out of the dudu than worry about Berlo’s probs.  So amid scenes of nuclear fury they’ve split  – and Silvio is now planning his vendetta.   If it follows the previous vendetta carried out by his henchmen we can expect to see some ludicrous allegations in the Berlusconi owned press, the Berlusconi media giving them a huge and unnecessary exposure, with the Berlusconi magazines then following them up for weeks on end, with the Berlusconi publishing houses rushing out books on the subject.   Private detectives all over Italy will be rejoicing at the bumper pay day they have coming, as Berlo has now to rubbish the 33 senators and 37 deputies who have told him to get stuffed.

This schism gives the government a very comfortable working majority, a detail which Silvio has overlooked as he still seems to think that he has the power to do what he likes.  he has yet to grasp that he is in a minority and that means he is not the PM.  He is mere a 76 year old saggy arsed convicted criminal.   And when he finally booted out of parliament next week, amid the howls of pain of his brown noses, he will bee put un der house arrest for buying votes in the House and that may well be the end of him for a while.

Meanwhile the lambs have abandoned the hawks.  If only it were that easy.  We have the hawks – who are so far up Berlos bum they are invisible, then we have the hawklets who are pretty extreme but may have an ounce of common sense.  Those who wanted the schism are the turkeys,  those who wanted to mediate , the lambs – and so on – we have the Pythoness (the repulsive Santanche) who has been courting 150 20 years old as the new entry to FI – which probably now makes her a panther too.   Alfano is a lizard.   The only one who has yet to have a moniker attached is Mr Fitto (see below) – arch Berluska, and ‘extremist’ and the architect of this collapse of the PDL and who a rather disturbingly looks like some sort of soft toy- I think its because his eyes are too close together.  Suggestions on a postcard as we wait for the hot hail from Emperor Ming. 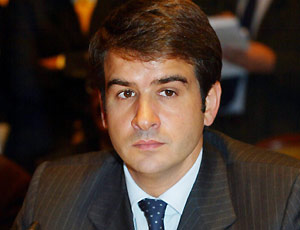 Posted on 16/11/2013 by rammers. This entry was posted in Uncategorized. Bookmark the permalink.