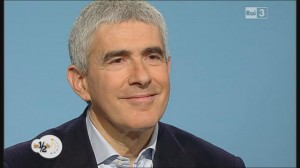 This harmless looking gonk is one of the most duplicitous nasty pieces of work in parliament.  He is Casini,  man of the centre, and UDC – that is a Christian democrat.  This means they spout moralistic bollox and ignore all of it in a desperate attempt to stay in power.  Casini is the arch DC gonk.  He votes against humanistic legislation on teh grounds that he is a reactionary Catholic prat.  And at the last election his pathetic share of the vote was halved again by the presence of Monti, reducing his movement to around 2%.   But he likes to think of himself as  a significant cog in the wheel of things, so has just split with Monti and is planning to vote against the decadence of Berlusconi (along wwith his religious cronies) on the basis that a new centre right centre party with Alfano as the leader may give him a bit of clout.  He is merely a hypocritical shite.   A loathsome slimy worm.  Feel free to let him know via twitter what you think of him. IN italian you could call him a viscido – which is slimy, oily, cowardly, brown nose – ideal really.

In the meantime The wrinkled one plots and squirms to stay in the senate and avoid being arrested for his many crimes.  He really doesnt want the public vote – much preferring a secret vote which he may be able to buy.  His lawyers are complaining about the hideous rush that everything has been done in.   Definitive sentence to be chucked out of parliament came on Aug 1.  It is now October 21 and he is still there.  We may have a vote in November.  How is it possible that a man who has been found definitively guilty and therefore according to the law must be thrown unceremoniously out of parliament can still be there 3 months later.  This is why ITaly is such a huge  barrel of  rotten apples, because they never empty the barrel, just chuck in more on top.

Posted on 21/10/2013 by rammers. This entry was posted in Uncategorized. Bookmark the permalink.