And dont have nightmares…. 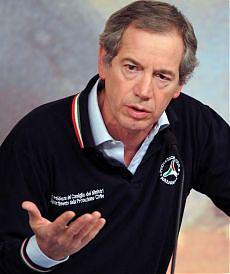 Theres a bit of the Nick Ross about Guido Bertolaso – he was the one who was meant to reassure the Italians to sleep safely when there was a bloody great earthquake in Aquila.  The one who told everyone that a big earthquake wasnt going to happen.  Except that it did.  The one who wasnt indicted for being a lying prat because he had not the scientific background to substantiate the utter crap he came out with.   The same Guido Bertolaso who was under investigation for a load of mysterious state contracts fot eh G20 to be held in Sardinia, but then got switched to Aquila (see above).  The same Guido who allegedly used state money for massages and happy finishes.  The same Guido who after his debacle with Aquila, started lecturing teh US on teh aid they gave to Haiti after the earthquake there.  The same Guido who Berlo has just announced as his ace up the sleeve for the relaunch of Forza Italia 2.0 .

Yes, you heard right  – One convicted criminal and Bertolaso are going to save Italy.

Posted on 17/09/2013 by rammers. This entry was posted in Uncategorized. Bookmark the permalink.