Its a bit John le Carrè 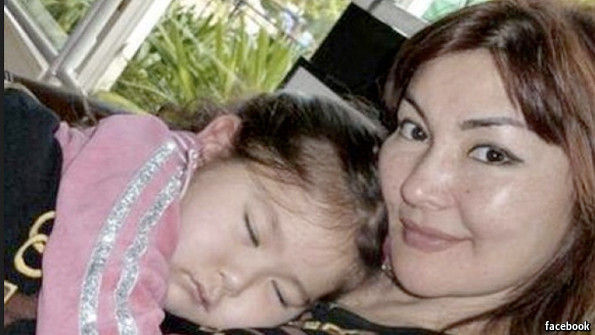 SILVIO BERLUSCONI’S party, the People of Freedom (PdL) movement, is beginning to discover the leverage it enjoys as part of a fragile government. Every time one of the PdL’s leaders is jeopardised, it threatens to walk out of Enrico Letta’s left-right coalition.

It happened when Mr Berlusconi’s appeal against his conviction for tax fraud was brought forward. (It will now be heard on July 30th.) And on July 15th, the same technique was used on behalf of his loyal acolyte, Angelino Alfano, the interior minister.

Responding to the tabling of a motion of no-confidence in Mr Alfano, the PdL’s leader in the lower house Chamber of Deputies, Renato Brunetta, declared that the government could not survive without him. His threat was a measure of the seriousness of the crisis which has built up gradually since the night of May 28th to 29th when Alma Shalabayeva (pictured with her daughter), the wife of a Kazakh dissident, was removed from her home on the outskirts of Rome and, on May 31st, sent back to an uncertain fate in her native land, along with her six year-old daughter. The motion of no-confidence will once again test the bond between the PdL and Mr Letta’s centre-left Democratic Party (PD), already strained by Mr Berlusconi’s trial.

According to a statement from Ms Shalabayeva, around 30 armed men and women dressed in black battered on the door of the house where they were living and barged into the property. When she gave evasive answers to their questions, one of them, she said, called her a “Russian bitch”.

An internal Italian government inquiry will reportedly point the finger at four officials, including the police chief of Rome, as responsible for the operation and Ms Shalabayeva’s subsequent expulsion. Mr Alfano has denied all knowledge of the operation until after it was completed.

If Ms Shalabayeva and her husband, Mukhtar Ablyazov, came from anywhere but Kazakhstan, his denial would be met with less scepticism. It is not just that Italy has an important trading relationship with the oil and gas-rich republic: ENI, Italy’s main oil firm, has a 16.8% stake in the giant Kashagan oil field. Mr Alfano’s boss is also evidently a chum of Kazakhstan’s strongman president, Nursultan Nazarbayev.

Western leaders have mostly been happy to do business with Mr Nazarbayev, but careful not to become too closely identified with someone who has ruled his country with an iron fist. One exception is the former British prime minister, Tony Blair, who has a reported £8m ($12m) a year consultancy contract with Kazakhstan. Another is Mr Berlusconi.

At an OECD summit in 2010, he described Kazakhstan as a “hero” on the world stage; its new capital, built by Mr Nazarbayev, as a “miracle”, and Mr Nazarbayev himself as “absolutely justifiably loved by his nation”. In fact, he said, he had read a report by independent experts who had discovered that 92% of the population of Kazakhstan loved their president.

So it would be entirely natural for the admiring Mr Berlusconi to have seen his friend when Mr Nazarbayev was on holiday in Sardinia recently. According to Unione Sarda, a newspaper, they did indeed meet on July 6th, six days after Ms Shalabayeva was bundled out of Italy.

The Unione Sarda report was categorically denied by Mr Berlusconi’s aides. They said he had spent the entire day at his mansion outside Milan, and had not seen Mr Nazarbayev at any time during his sojourn in Italy.

That is an article from the Economist, which gives an idea of the crisis engulfing Italy at the moment.  The problem is this:  In this embarassing coalition government we have, the PDL are holding hostage the entire left wing and majority of parliament.  Alfano  (Home Secretary and PDL)  says he didnt know, the Foreign minister – Emma Bonino and radical left winger says she didnt know, but helpfully adds that ‘Weve made a  right botch up, and now we’ve got to sort it’

The problem is here, why Italy decided to repatriate this woman, why it took 30 armed officers without a uniform between them to burst into her flat, why she was separated from her baby for 3 days, why they were quietly booted out of the country with no hearings, and why – amongst all this – did the Kazack president come and have a holiday in Berlusconis right hand mans house and why did Silvio nip off to Russia last weekend.

The whole affair stinks- and must be made public.  Alfano bleated yesterday ‘ Its not as though she’s NElson Mandelaìa ‘ – helpfully reducing the plight of a political refugee and her child to column inches.  The fact is that the Constitution Article 10, specifically gives asylum to those denied democracy in their homeland.    As this woman is now under ‘investigation’ in Kazakstan and is not allowed to leave, its a fair bet that she will end up in prison and her daughter will go to an orphanage .   Her husband meanwhile is a legitimate politcal asylum seeker granted asylum in the UK.

So heads are beginning to roll in a desperate attempt to keep Alfano in his job – the first to go yesterday was the ‘Cabinet secretary’ who fell on his sword, only to pipe up a few hours later and say that Alfano knew everything that went on.  Today we expect another 2 or 3 resignations and Alfano to continually repeat that he knew nothing.  Which basically seems to be the story of his life – he doesnt know much poor lad.  (Like the unpleasant Scajola who had a house bought for him in the centre of Rome to his ‘unknowledge’ even though he lived there and sold it at a vast profit).

So LEtta is desperately trying to keep it together.  He allows Calderoli to stay after his appalling show of racism, and now it looks like he will do everything possible to keep ALfano in his job.  Except that his party (the PD) isnt buying it.  They, legitimately perhaps, say that a line must be drawn somewhere – and this perhaps is it.

Certainly Berlusconi will have no problem sacrificing Alfano if it means elections in October – he can have his legitimate impediment resurrected and fight the elections.  But for this we need to wait till the end of July – and the sentence of the Cassazione – if he is not allowed to stand for public office, he will be much less inclined to pull the rug from under the govt. So we arrive at the nub – yet again.  is Italy being mired yet again for the sake of one person.   The choice of holiday destination and villa of the Kazack president is too coincidental?  And BErlo’s rushed top secret visit to Russia last weekend?   We mortals cannot know these things- other than Berlusconi in the last 10 years has made Italy and by implication himself – huge investors in despots countries.   The only question is is how much BErlusconi personally gets out of it, because this will inform everything else.    Let’s hope there is some serious investigative journalism going on at this moment – because it would be a real shame if also this were swept under the carpet, and a dissident condemned to keep a couple of politicians in power.

Posted on 17/07/2013 by rammers. This entry was posted in Uncategorized. Bookmark the permalink.