So Grillo’s insistence that as the largest single party in parliament, but 3rd in the coalition stakes, it should be Grillo that forms a government seems to be taking hold. Slowly.  From the derision that met his election, we now have various gods of industry saying that actually, well, they voted M5S.  Napolitano, the president, yesterday came on side, and the US is being very carefuly not to slag him off (see German clown jokes).   And now, after 3 years of lambasting everyone in the piazza, Grillo is beginning to put some flesh on his policies.  The one that has scared most people is his ‘lets get rid of pensions and 1000 euro per month to everyone’ gag.  WHich in translation comes out as a cap on pensions of 2500/5000 a month (delete as appropriate) and 1000 euros a month for everyone as a citizenship wage.   It would apparently save 7 billion a year.    The trouble as I see it, is that the undoubted refuge in the high courts against this move, would obviously be agasint Grillo seeing that the judges have pensions of over 10 grand a month. 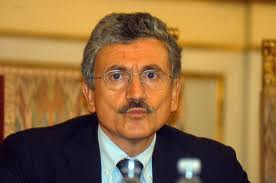 This little little man is called D’Alema – he is the fixer, the power broker, the man behind the New Labour screens – and as you can see resembles a solicitor from a 1920’s comedy.  Only in appearance – as he is a dangerous bad little man.  One of those nasties who is only interested in power and in the power games that accompany it.  Once PM for a brief unhappy period, he now really wants to be president of the republic (allegedly)- and so is proposing a PD government with the presidency of one chamber to M5S and the other to Berlusconi.  THis would get him enough support to get into the Colle.  his personal ambition doesnt seem to take into account that if the PD give ANYTHING to Berlo, the party will explode like a scene from Skyfall.  This man has to got to go.

And just to keep Steptoe in the news he’s being investigated by prosecuting magistrates in Parma for having bought votes by sending the rebate letter.  And in NAples for having paid 3 million to a IDV senator to cross the floor and join the PDL.  The senator says yes he did, I had lots of debts.  The PDL are threatening to demonstrate against the judges and for democracy, ……. so that would be for the democratic right to break the law and not get punished because you are a rich important bloke?

Posted on 01/03/2013 by rammers. This entry was posted in Uncategorized. Bookmark the permalink.