I am respecting the electoral silence, even though Dom Steptoes is incapable of keeping his mouth shut and used a Milan press conference to slag off his enemies again.   It’s almost as if Toad knew that the Inter-Milan derby would be this weekend when he pushed for the elections to be held at the end of February.  And then by chance buying Balotelli.  Life is just chocabloc with coincidences isnt it.

Which is what this nasty man must be saying. 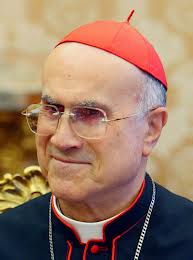 This is Cardinal Bertone – the power behind the throne of Ratzinger, who has been getting increasinglyvocal this week – perhaps to help his election campaign to become popey.  There are rumours in the italian press that a very powerful gay mafia in the Vatican controls lots of stuff.   Bertone is not happy that people talk about a highly secretive rich political entity, so he makes veiled threats to the press, without denying a thing.  Apparently it is very dangerous that the press can put pressure on the conclave to influence their vote.

This suggests a flash of reality in the hocus pocus.  Bertone is actually admitting that God does not personally guide the cardinals in their choice of capo, but its just a humdrum normal political election, and for that reason the very antigay cardinals should be in attendance, even though the Americans dont want their to go, and the UK one is just about to be blown out of the water – (I hope not an unfortunate choice of words).    The usual Vatican hypocrisy at work, and if we’re lucky they wont be able to keep the lid on this one.

Posted on 24/02/2013 by rammers. This entry was posted in Uncategorized. Bookmark the permalink.