So the Monte dei Paschi – the worlds oldest bank – also looks to be one of the most corrupt.   As of today the management are going to be investigated for fraud – it seems they didnt tell the shareholders what they were up to when they bought the bank of Antonveneta – which also cost much more than they said (envelope stuffed with cash anyone?).  Its going to make Northern Rock look like some kids piggy bank.  Monti has already authorised a loan/bond scheme for 4 billion, which being election week the opposition have pounced on as the same amount earned by the IMU or new council tax.

For the average Italian, therefore, its a no brainer – if they hadnt lent 4 billion to the MpS, they could have abolished IMU – yes – that is how the Italian grasp of economics works.  Point out that the MpS has current accounts to the tune of 57 billion, and its too big to fail, especially at the moment, and the Italian will tell you that Monti is taking bribes from the banks to ruin the Italians and impose the new world order.

On the up side Apple have patented a smart shoe – what a relief  – Steve will be spinning in his igrave.

Better still in Rio de Janeiro they have put QR codes into the mosaic pavements – so you can get info about the city as you walk around. 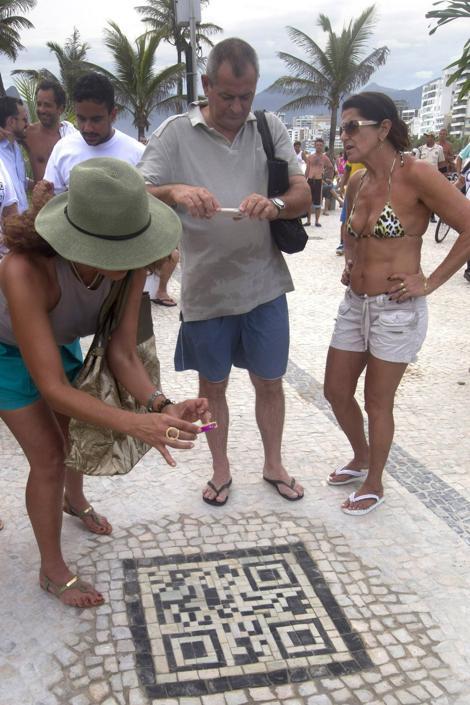 And la Merkel is trying to have Berlo thrown out of the PPE for being a racist thug, after his proMussolini comments on Sunday.  For those of with better things to do Ill explain:  The ex premier announced at the Day of Remembrance that the racial laws introduced by Mussolini were the worst thing he did – otherwise he was a top bloke, who fell under the sway of the naughty Hitler man and joined the Nazis only cos he didnt want to be on the losing side in the war’.

Obviously there’s a bit of fall out, and Berlo has a) denied his said it    b)when presented with the video evidence of his exact words claimed the left wing press were making a mountain of a molehill and he is the best friend of Israel and      c)slept through the entire Shoah service and     d) wasnt even invited to the event, turned up anyway and took Monti’s chair. 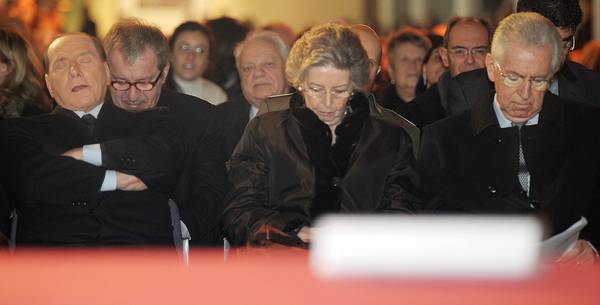 So apart from being a grade one tosspot Berlusconi has just annoyed everyone except the inhabitants of Casa Pound (the Ezra Pound fascist boys) who have invited Berlo to join their party.

I happen to think that Steptoe planned it all, he’s far too ‘furbo’ to make such a gaffe – he knows that alot of Italians will secretly agree with him and though they wont say anything in public, when they get into their little curtained off voting booth, they will put their cross on the rehabilitation of Benito Bunga Bunga box.

It is something that the Italians as a country have to face up to.  Since 1943 there has been a complete denial of the fascist years – the school text books either omit them all to together, or in a 1066 and all that way say he was a bad leader who made pact with the pope called the latrine treaty.    There is a collective refusal to admit that Mussolini was popular, he didnt need to introduce the obligatory membership of the party until late on, and that fascism was the result of a failed Risorgimento and subsequent politics of a desperate attempt to create a country that didnt exist in the heads of the Italians – it was ‘a sin against history and geography’ and, it has to be said, for most Italians remains just that.

But all that aside, thank the lord for Monti who has managed to steal all the headlines by suggesting that the school summer holidays should only be 1 month, (instead of the 3 and a half they now enjoy) – thats not going to win many votes, Mario.    If the kids are in school, the wives cant go to the beach for 3 months, leaving the husband at home to enjoy his annual fling.  You lose the votes of wives, husbands, teachers, lifeguards and anyone who works at the seaside, restaurants (as Giovannni goes out to eat when hes at home on his own),  the list is endless —

Posted on 29/01/2013 by rammers. This entry was posted in Uncategorized. Bookmark the permalink.