uncle steptoe tells us that the spread is a con and a lie – and is something that we shouldnt give a toss about.  Hmmmm  –  it may be so for a multi billionaire, but for mere mortals with a mortgage, a loan,  and who require public services that rely on borrowing money, it is actually quite important.  Thanks Silvio for your astonishing ignorance once more.

The attached lady is called Francesca, and she is 27 years old.  She has wilfully chosen to be the official girlfriend of a 76 year old despot – I think we can see a very important appointment in the next cabinet (Shadow or otherwise) of the leader of the PDL – parachutes at the ready. 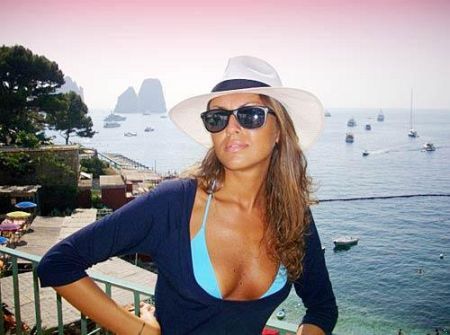 And continuing the theme of pathetic attempts to prove your virility – here is a photo of the ex minister Brunetta – he’s the tiny one on the right. .. 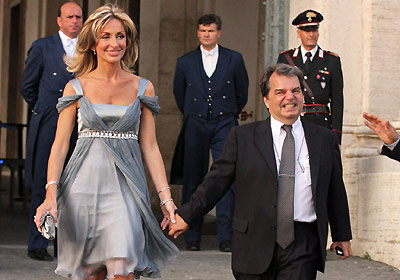 This poor politician has announced that he cant afford to pay the second instalment of his council tax, and has had to go to the bank for a loan.  Now -.. bearing in mind that he earns about 15000 euros A MONTH – it seems unlikely, unless he has amassed a property portfolio to rival that of the Duke of Westminster.  The other possibility, if he isnt telling porkies, is that he may be just completely uselss with money and spends it as fast as he ‘earns’ it.  Now if that is the case, should we have trusted him with an entire government department on ‘waste’ ?  And should we be thinking that it would be a good idea if he were reelected to be – lets see —– Chancellor of the Exchequer???

Berlo yesterday said he would be recandidating only 10% of the PDL MP’s – immediate panic in the ranks, before a hasty denial – but there is undoubtedly jockeying for position, and Brunetta is better placed than most to be a jockey – unfortunately he will probbaly by left out of Silvios dream team, as will most of the parliamentary party -and there is nothing more bitter than an MP scorned –

Posted on 12/12/2012 by rammers. This entry was posted in Uncategorized. Bookmark the permalink.