and they’re taking aim – Friday is the date when the fan will be hit full on, the reason being Uncle Steptoe whose nose is decidedly out of joint because he’s not important any more.

To be fair, the entire Pdl is a bit miffed, because they have been dallying around the regional elections which have to be held just after Christmas.  Remember Dusty, who left Lazio in September, and they still havent decided on the date for the elections.  Then Formigoni and Lombardy – another region up for grabs after mass resignations – and then theres Molise which has to redo its elections from last year because they were fixed.  The probelm for Mr TOad is that he knows the Pdl are going to get royally stuffed in these elections and Lombardy and LAzio are historic vote winners for the right.  If they lose, as they surely will, then what will happen to the right in the political elections later in the year.  Without, of course, BErlusconi to rescue the nation.

And here is the crux.  The Pdl want all the elections on the same day, to minimise the damage – and they want them in February.  Napolitano the president has already said that there will be no elections without a new electoral law that is not the ‘pigsty’ we have lived with for the last 6 years.   Berlusconi wants to keep the porcellum to keep his closed lists – a wholly undemocratic way to put his mates at the top of the list when they arent even voted for.  So Mr toad is now threatening to pull the plug on Monti if he doesnt get his way.   Monti has called his bluff announcing regional elections for Feb and nationals for April, which is the worst of all worlds for Uncle Toad as it will also usher Monti in to the presidency, as Napolitano steps down next year and Steptoe wanted the job.

So its all going cake shaped – and add to the mix – the new name ofthe centre right will be —- ‘the centreright”.  You can’t knock the logic.  And then there is the question of the closed list – because perhaps Berlusconi wants to parachute in his ace vote catcher – his daughter, Marina (who sounds like a THunderbird puppet, and isnt so far from the truth) who will save the world like Lade Penelope… thankyou Parker… 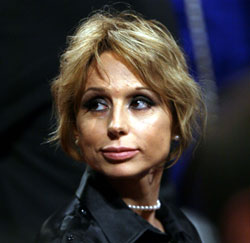 Posted on 15/11/2012 by rammers. This entry was posted in Uncategorized. Bookmark the permalink.