Its the end of civilisation as we know it… 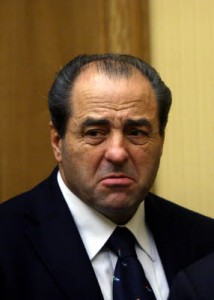 Antonio di PIetro is the leader of Italia dei Valori – a left of centre party set up in the wake of Tangentopoli (the bribery scandal) that brought down the last republic and led to the rise of Berlusconi.  Di Pietro was one of the magistrates who brought various lynch pins of Tangentopoli to justice, and therefore was ideally placed to be ushered into Parliament as the new broom.

IdV – his political party, generally garners between 6 and 8 % of the national vote – not peanuts,  in fact has brought the party an income of 45 million euros from the state as ‘electoral expenses’ over the last ten years.   The expenses (and then the wages, expenses, cars) etc are all accepted by the IdV – and this brings charges of them eating at the same trough as the others.

Di Pietro (allegedly – he is very active in the libel courts) runs his party as a bit of a personal fief – the association that governs the political party bit is 3 people, of which two are Di Pietro and his Mrs.   He is a gob on legs – and in my humble, it is Di Pietro himself that stops the party becoming a serious force in politics.  Why? Mainly because Di Pietro cannot string an entire sentence together.   To the question When is Xmas – you might expect an answer such as 25 December, in 10 weeks, etc.  The same question to di Pietro would result in the following:

Yes, well that is an interesting question.  I believe it will be in December in the second half of that month, a month that is called the 10th month even though it is the twelfth month of our calendar, but the 10th month of a different calendar, which started 10 months earlier and not 12 months earlier as would be suggested by its name, which is not legal proof of it being anything other than it is, in fact the opposite. …. 25th that would be the date, unless there is proof to the contrary, which there isn’t unless the entire western world is wrong and I believe Berlusconi should be in jail.

Not great stuff for tv soundbites.  Talking of which,  last Sunday the Rai 3 show REPORT – (the Panorama of Italy) did its own sacred cow show – but instead of Jimmy Saville burst open the pus-filled sore of Antonio di Pietro.  Now, a mere 6 days later – it would appear that Di Pietro will be removed by a special congress of his party next month.  It would seem that Tony, Tone- Toe,  has been less than squeaky clean in his dealings with his party, having amassed a property portfolio that would make Prince Charles blush.

Some senile old dear left Romano Prodi and Di PIetro a houseful of cash in her will – Prodi gave it to party – saying that he didnt believe himself to so fascinating as to get  a personal gift  from a stranger.  Di Pietro kept his – it was given to him apparently – and so he spent 800 MILLION lire, (4 millions euros) on buying more property in various spots.  And then of course his children have developed high flying politicial careers in the blink of a bats bum hole,  and so on and so on and son.

THe great white hope of Italian politics has become one of them, and now will have to step down (not before time)  but its just another sad indictment of a sick sick system.

Posted on 03/11/2012 by rammers. This entry was posted in Uncategorized. Bookmark the permalink.