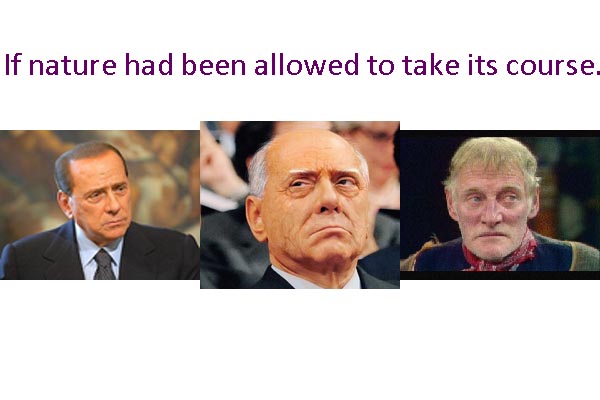 The magnanimity of uncle Steptoe is universally acknowledged, but even he has outdone himself this time.   The PDL is at a record low of 18% and is falling apart at the seams.  It isnow unelectable, and Steptoe has realised that he is a liability for the centre right.   Despite trying to push through amendments on a daily basis to save him from a guilty verdict in the Ruby Rubacuore court case,  Berlo has now devised a new tactic to let him exit gracefully stage left and run off to a tax haven.   He has let it be known that ‘he is willing to not stand as a candidate’ for the unity of the centre right and the hope of making a pact with the ever vascillating UDC of Casini.  Obviously to not stand, Steptoe wants some safeguards – or to putit more prosaically, he wants a cast iron guarantee that noone will pass any laws that endanger his media empire – so no conflict of interest, no monopoly law, no unpleasant investigations and so on.   I reckon the UDC will go for it – Casini is so desperate to be a force in politics that he would agree to anything that will get him a ministerial seat, or even bettera nomication for the next President of Italy.  Steptoe can go off and do what he does best, secure in the knowledge that the last 18 years of his influence has let him get away with murder

Posted on 09/10/2012 by rammers. This entry was posted in Uncategorized. Bookmark the permalink.