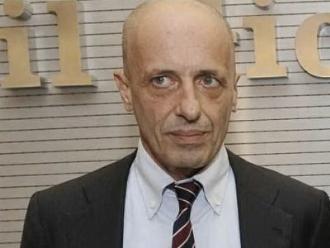 This rather unpleasant individual who has the ring of Voldemort about him, is the ex-editor of the Berlusconi in house paper – Il giornale.  Yesterday he was sentenced to 14 months in prison for an article he wrote/published a few years ago about a judge.   Mr Sallusti says it is all a conspiracy and a denial of the right of opinion.   To anyone else familiar with the law, the article was blatantly libellous.   To cap it all the article was ‘anonymous’ – whether Sallusti wrote it, but didnt have the courage to put his name to it, or whether he condoned a hacks unproven allegations, the result was the same.  There is now a backlash against the ‘freedom of the press’ – a freedom Sallusti – as the barking mad dog of Mr B – has spent years trying to clamp down on.   Pot –  kettles – black

La Polverini, despite her press conferences, hasnt actually resigned as she told us on Monday.  She says a day or two more wont make any difference, other than she seems to be spending her time making lucrative appointments for her friends and cronies before she  finally throws in the towel.

Posted on 27/09/2012 by rammers. This entry was posted in Uncategorized. Bookmark the permalink.